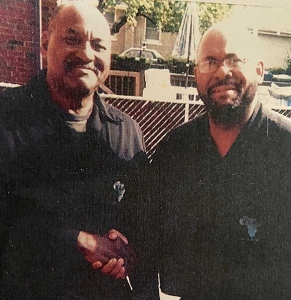 Owner Percy J. Allen Jr. says he has “always had an entrepreneurial spirit and the desire to start, own, operate, and expand my own company.” He established M.E.P. Exterminating 16 years ago, naming the company after his daughters Mahogany, Ebony, and Pyeisha Allen.

During these unprecedented times, Allen says he maintains a positive attitude about his business and community. “My hopes for M.E.P. Exterminating and Evergreen Park are hopes I have for our world post Corona (COVID-19)—and that is of health, happiness, and prosperity.”

Thanks to Raising Cane’s Chicken Fingers for finding new ways to give back during the COVID-19 pandemic!

While the majority of its 500 restaurants are open and offering drive-through service, some of its dine-in-only restaurants have shifted operations to support their local communities until they can once again prepare their chicken finger meals.

One of the innovative ways Cane’s Crewmembers have been giving back is by sewing three-ply cloth masks. On May 19, 1,000 of these masks were donated to Little Company of Mary Hospital in Evergreen Park, IL.

Teams of Cain’s employees are being paid to produce the masks, many of whom had never sewn before this initiative began. The teams work in block-schedule shifts in adherence with the company’s social distancing procedures.

“Our team is extremely proud to have the opportunity to step up and support our community in such a unique and meaningful way,” said Leader of Restaurants Olivia Fazzola. “Healthcare workers are putting their Community first, and we are honored to show our appreciation to them with these donations.”

“We are excited to have been chosen as the recipient of these handmade masks. This thoughtful donation will help us stay safe and healthy as we care for all those who come to us during this unprecedented time,” said Octavia Bonds, Community Relations Coordinator, OSF HealthCare Little Company of Mary Medical Center.

Raising Cane’s is also supporting local healthcare workers with its nationwide neck-gaiter campaign. Local Chicago area restaurants continue to sell their limited-edition supply, and 100% of the net proceeds made from these sales will be donated to Loyola Medical.

Through their partnerships with Loyola Athletics, Chicago Wolves and Oak Lawn Community High School, Raising Cane’s has been able to provide 1,248 meals across the Chicago area to healthcare workers, including Christ Hospital and Little Company of Mary Hospital. 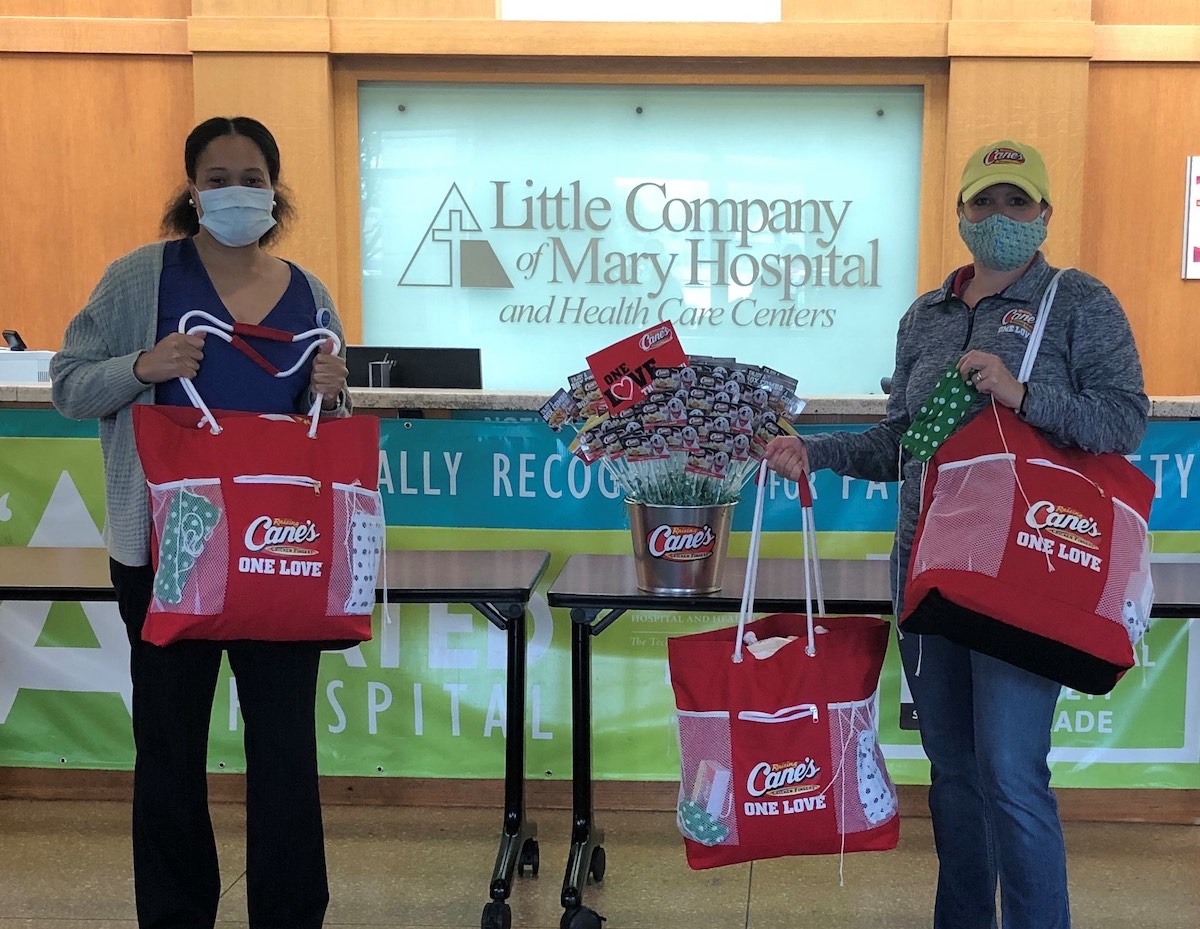 Our local Culver’s is taking part in a company-wide promotion to benefit local food banks. From May 19–24, a dollar from every Concrete Mixer sold will be donated to the Evergreen Park Village Pantry. This initiative is a wonderful way to support our local food bank and the many residents who use it during the pandemic. Culver’s, located at 9515 S. Kedzie Ave., is open daily from 10:00 am to 10:00 pm. 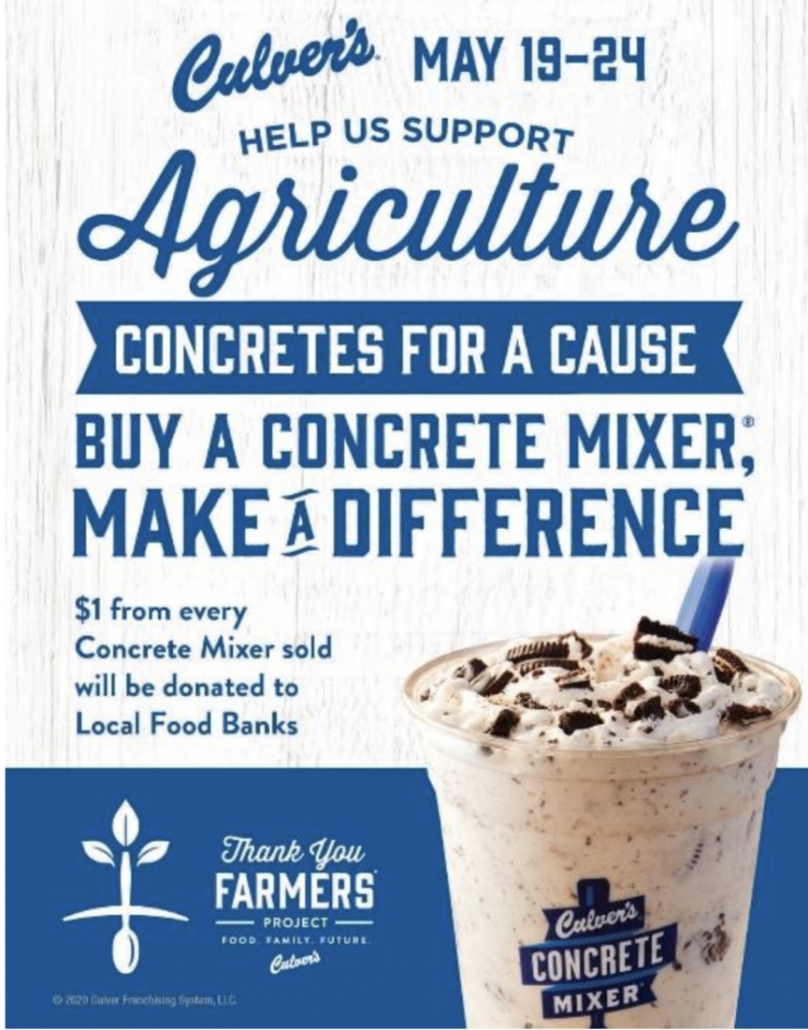 OSF Little Company of Mary Medical Center and the State of Illinois have partnered to create a program allowing people to recover at home, yet not feel alone.

To register, simply, call our 24/7 Nurse Hotline(833-673-5669), or visit our website www.osfhealthcare.org. There clients will be assessed and enrolled and then followed up with a delivery of a care kit, which includes: thermometer, hand sanitizer, COVID resource guide, and a tablet, pre-loaded with applications to communicate to our clinical team and even support for monitoring their mental health.

END_OF_DOCUMENT_TOKEN_TO_BE_REPLACED

Cool Clouds is a retailer of electronic cigarettes and e-liquids, also known as vapor products. The business, located at 3837 W. 95th St., assists adult smokers in their transition away from combustible tobacco products.

The store is owned by Evergreen Park residents Bridget Carey and Reid Nuttall. Both are former smokers who enjoy helping other adults find a less harmful alternative to smoking cigarettes. Their approach starts with educating customers about the range of smoke-free products available, then finding a good fit.

“We walk our customers through the process, asking questions about their smoking habits and how much they smoke, as well as finding their level of comfort with this technology,” said Nuttall. “Then we work with their budget, lifestyle and goals to find a device, nicotine level and flavor that will be satisfying and make the task of quitting smoking less daunting.”

According to the Cool Clouds website, vapor products are electronic devices with three components: a battery power source, a heating element, and e-liquid. E-liquid is applied to the heating element directly or passively with the use of a tank and with the power of the battery, the liquid is heated to the point that it becomes vapor.

Vapor products include electronic cigarettes, personal vaporizers, mods, pens, cigalikes and vapes. The one unifying characteristic is that these devices do not burn, so they do not expose users to harmful smoke or tar.

E-liquids usually contain a mix of these four ingredients:

The Evergreen Park shop opened in 2014 and is their original location. They also have a second store in Tinley Park.

Cool Clouds also offers a range of CBD (cannabis) products, as well as glass and accessories for customers who use cannabis.

To learn more about Cool Clouds, visit them online at https://www.coolcloudsvapor.com/.

Unidad, the popular Latin themed restaurant, is hosting a unique holiday promotion this month for its customers. When you dine in the restaurant this month, you’ll receive a sealed red envelope that contains a surprise gift inside. But don’t open it!

Instead, take the unopened envelope back to Unidad and have dinner there Sunday–Thursday, January 3–31, to redeem your prize! The giveaways range from a free margarita to a big screen TV.

Evergreen Park is a great place to live, work, study, and do business, according to its number one fan, Mayor James Sexton. He presented a snapshot of the Village’s progress over the past year at the 2019 State of the Village Luncheon, held September 26 at the new Community Center.

“The future of this village has never been better,” Sexton told the gathering of Chamber members, local officials, and reporters. ‘The large national retailers have found Evergreen Park, and they are enjoying themselves here. More and more are coming.”

The Village issued 514 business licenses to brick-and-mortar locations over the past year, Mr. Sexton said. New developments and expansions include the following:

He also commended the Village’s law enforcement departments. With 62 full-time police officers, Evergreen Park has more than double the national average, Mr. Sexton said. The Police Department provides funeral watch and vacation watch services to local community members, offering to stop by a residence three times daily to make sure the house is safe. For businesses, they offer Walk & Talk service, in which an officer parks a patrol car outside a business, gets out, and walks around.

Throughout his speech, the mayor urged residents and business owners alike to keep the Village of Evergreen Park strong by shopping within its borders. He urged the audience to remember our longtime small, family-owned businesses, including Barraco’s, Evergreen Doors, and Wolf’s Bakery.

“One percent of most everything you buy in Evergreen Park comes directly back to this Village,” he said. “. . . So please, if you have the opportunity, shop here and shop local.” 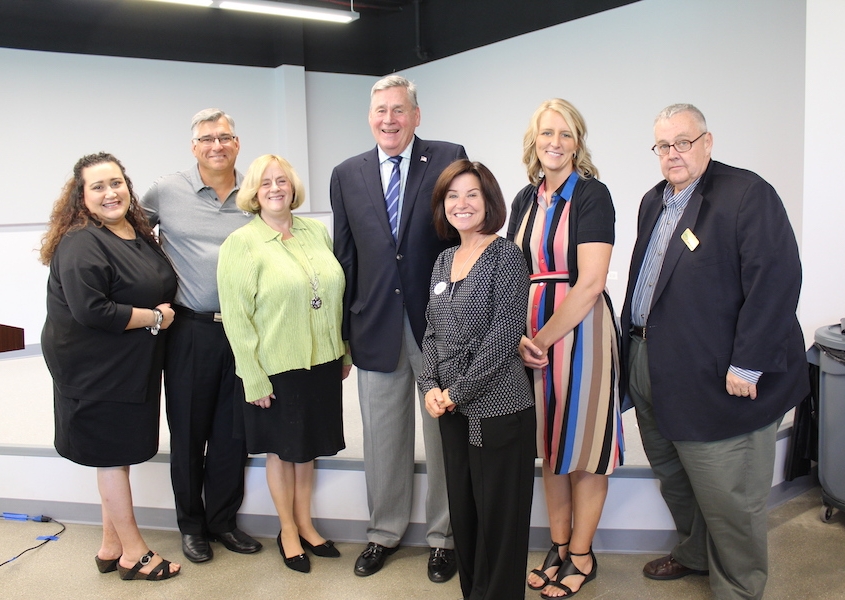 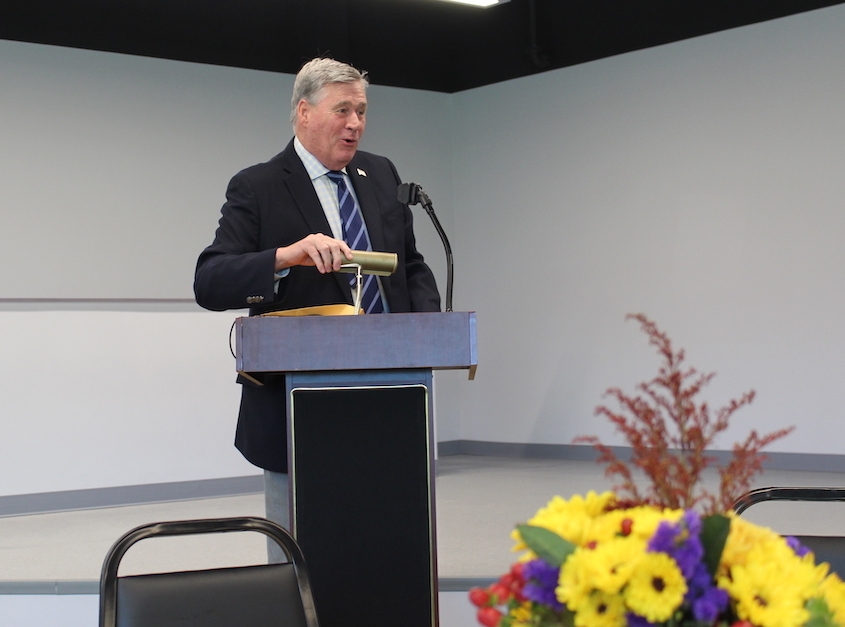 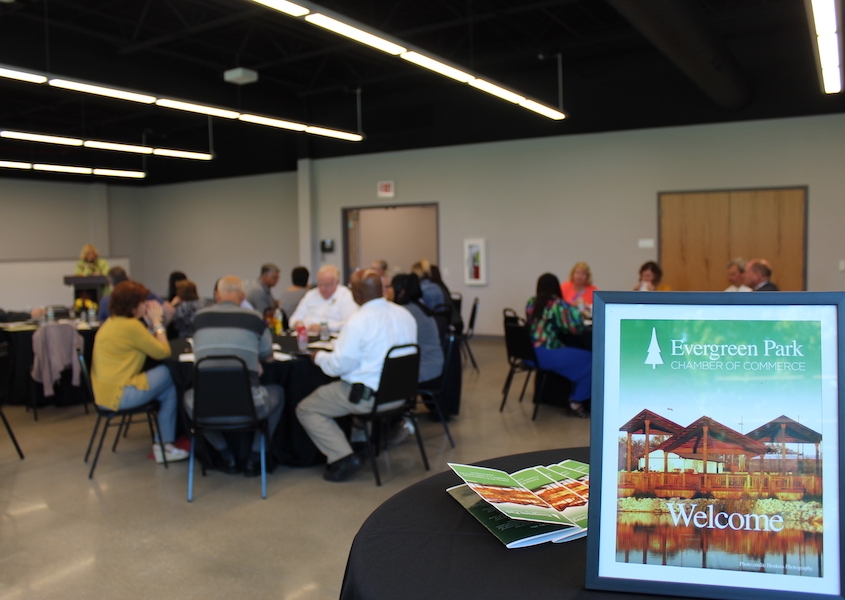 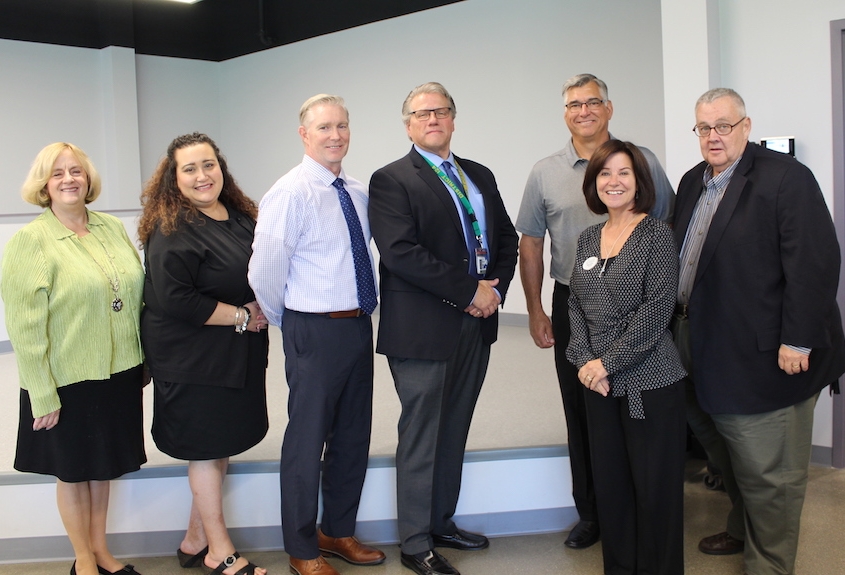 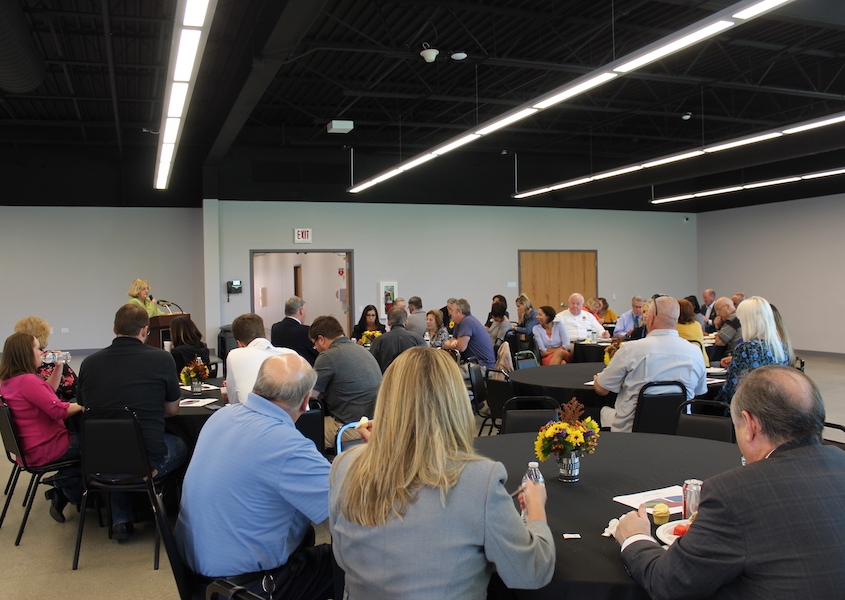 Do you know a younger person heading to college this fall? Chances are, she or he would benefit from taking a self-defense class before leaving home. The Academy of Self Defense and Fitness is offering a series of summer seminars to help students protect themselves from threatening situations they might encounter on college campuses.

The 75-minute seminar will cover self-defense basics for young adults. It will be offered on several dates in June, July, and August. For details and to register, please see the attached flyer. 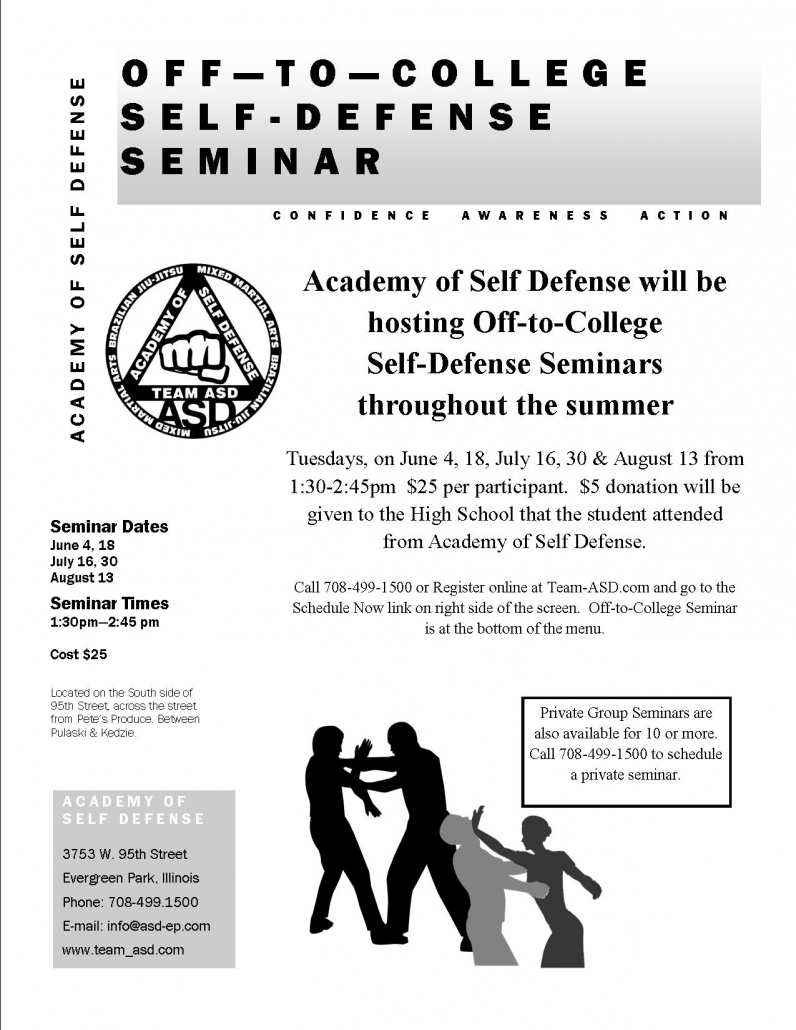