The Evergreen Park Chamber of Commerce welcomed new leadership at its annual Holiday Luncheon on December 11 and announced its 2019 Citizen of the Year. The award went to Dennis Duffy, retired teacher and former director of the EP Recreation Department, for his many contributions in the areas of education, recreation, sports, family, and community programming.

“Dennis successfully blended the traditions and the activities of the past with new innovative and expanded programs of his own,” said EPCC Secretary Laura Shallow, in announcing the award.

His contributions to the Recreation Department include maintaining a successful preschool, day camp, and youth sports programs. He expanded the performing arts program and added several new sports offerings. Community events, including the 3rd of July Parade, also grew under Duffy’s leadership.

In addition, Duffy was a teacher for 35 years and chair of the History and Social Studies Department at Brother Rice High School, where he also served as a varsity football coach.

Duffy accepted the award with humility, thanking the local schools for their cooperation. He also singled out his two program directors at the Recreation Department, Karen Sexton and Jill Lynn.

“They make the recreation department go,” he said. “Every time I see M.A.S.H., I think, ‘I’m the colonel, and there’s Radar.’ They’re the best. I owe my success to them.”

During the luncheon, the Chamber also installed a new slate of officers and directors. 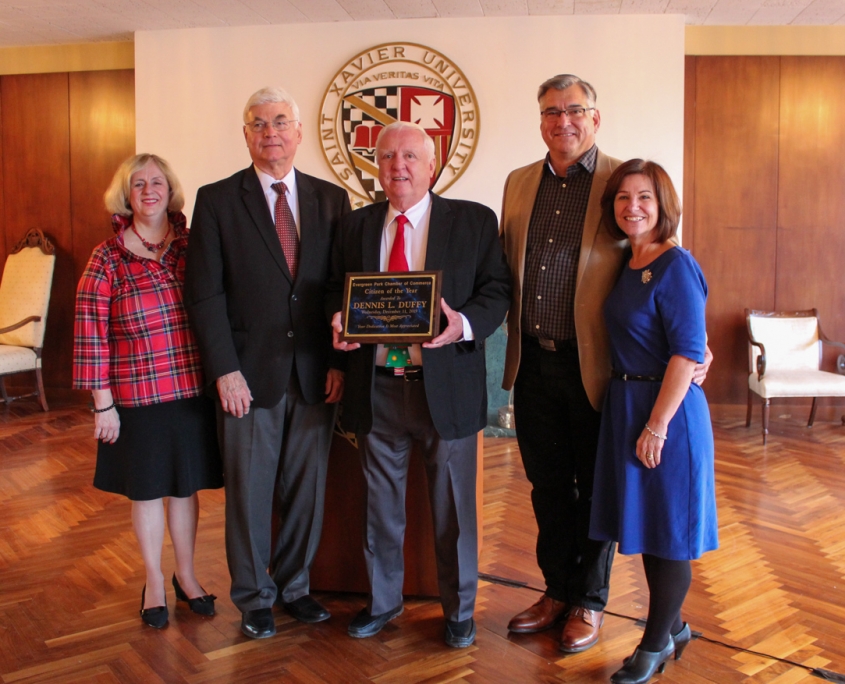 Dennis Duffy, center, poses with past Citizens of the Year. 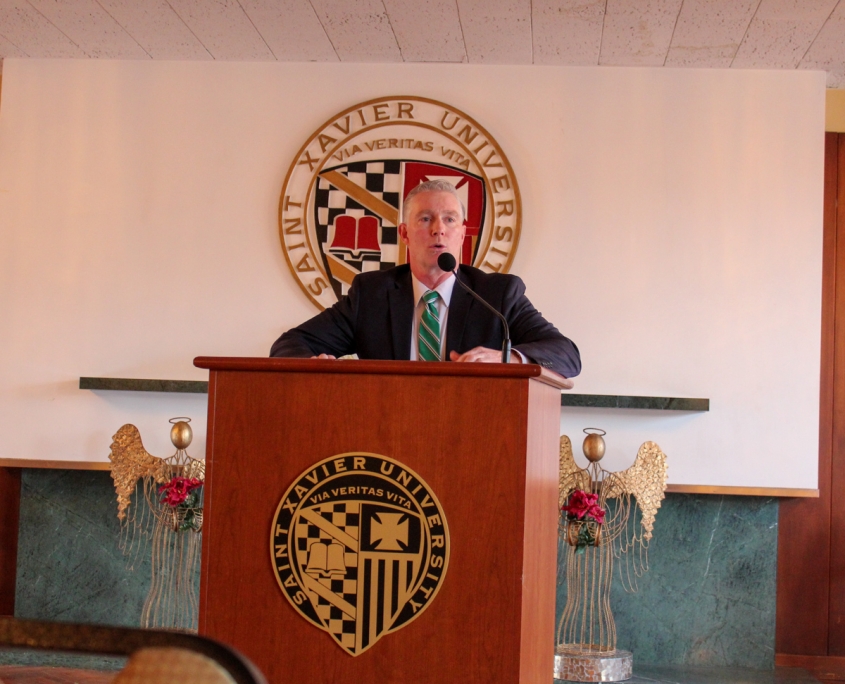 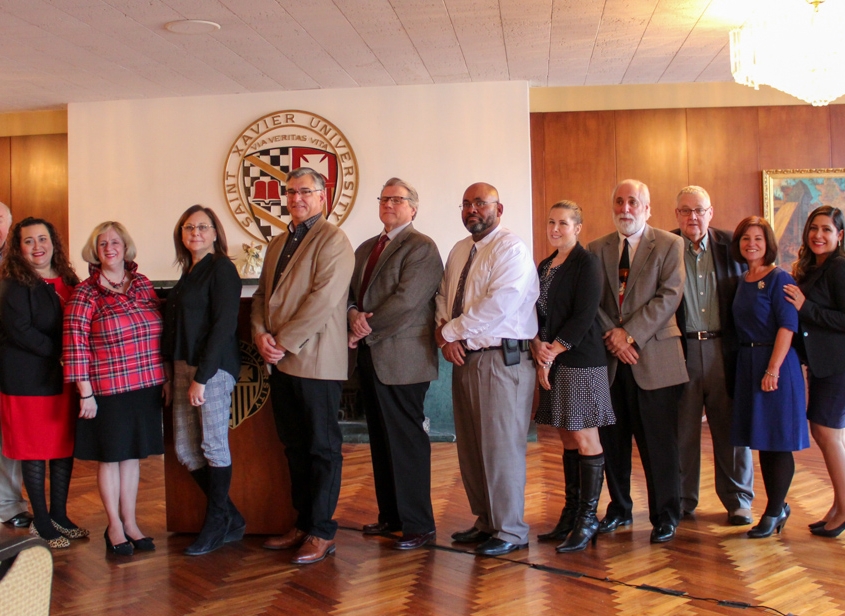 Officers and Directors of the Evergreen Park Chamber of Commerce 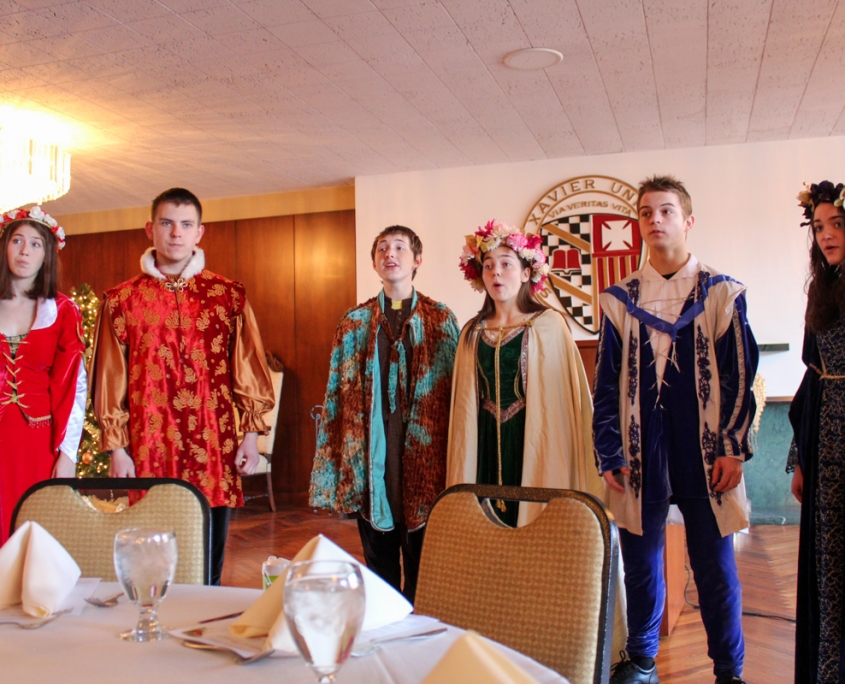 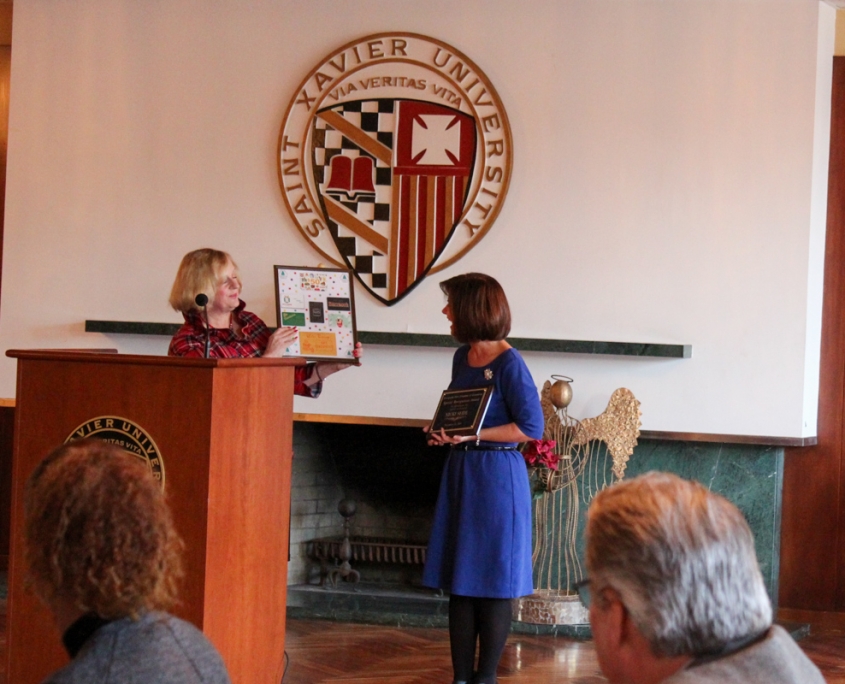 Outgoing EPCC President Nicki Seidl receives a plaque and a gift thanking her for her tenure. 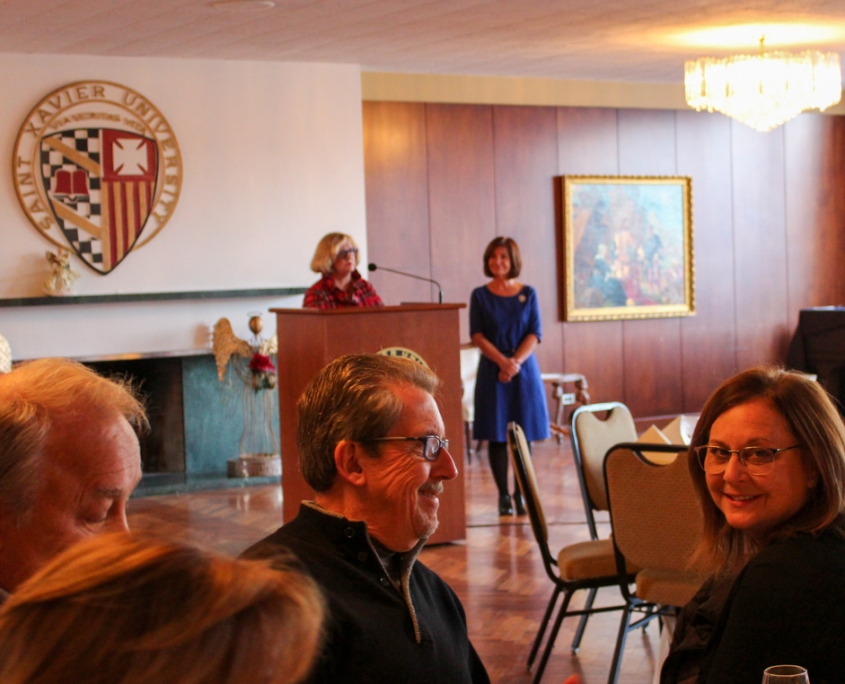 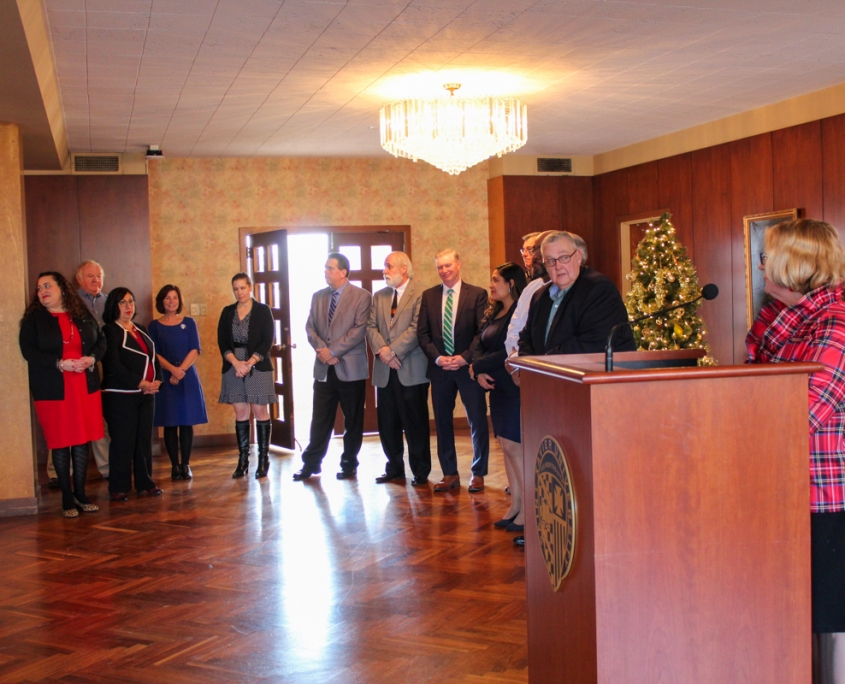 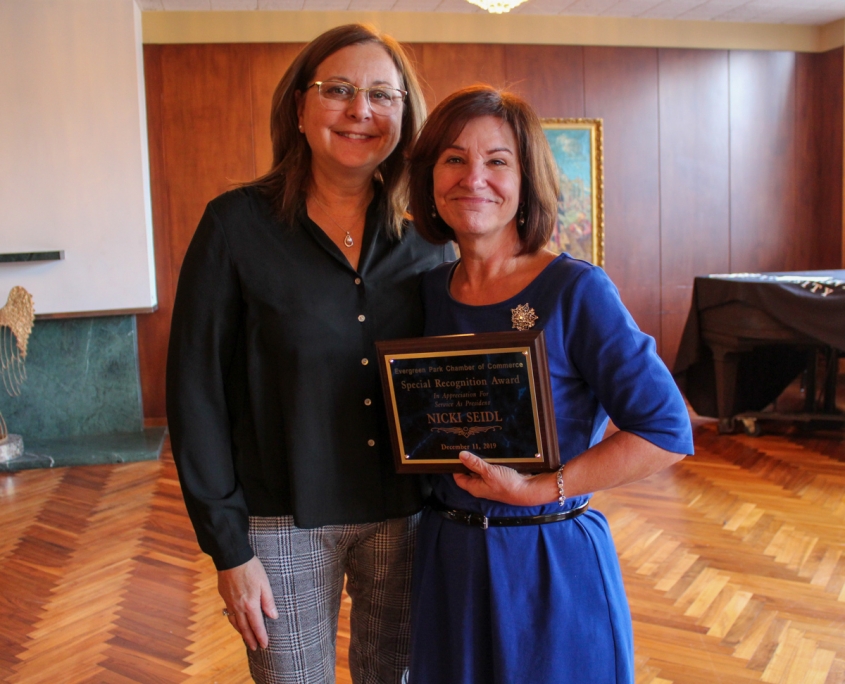 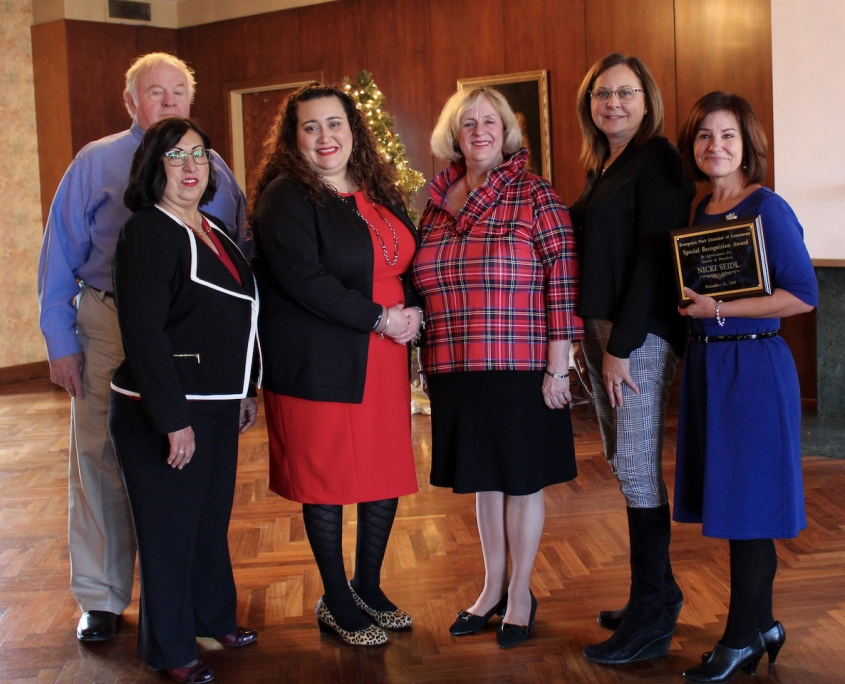 Evergreen Park’s new Humana neighborhood center in the new Plaza is a welcoming, bright, and versatile space. On a recent morning, it deftly transformed from a conference area where Chamber members enjoyed a breakfast buffet into an exercise space for an exercise class with local seniors. Humana is a health insurance company, but at their neighborhood centers, they also provide a variety of community programming for the public.

The center, which opened last summer, recently hosted the Evergreen Park Chamber of Commerce for a networking breakfast and nutrition workshop called “Rate Your Plate.” Humana health educator Kristin Conrad shared best practices for healthful eating, along with helpful tips for avoiding pitfalls. Some of her key takeaways:

You should eat nine servings of fruits and veggies per week.

76% of Americans don’t eat enough fruit daily. Expense, availability, and shelf life are the main obstacles cited. Conrad suggested purchasing fresh produce when it’s in season, then freezing it to enjoy throughout the year. She said that women should aim for eating 1.5 cups of fruit per day, versus 2 cups for men.

87% of Americans don’t eat enough vegetables, even though they have the highest nutritional value of all foods. Women should eat 2 cups of vegetables per day; men, 2.5 cups. Conrad said that if you store veggies in plain sight, chances are you’ll eat them.

While Americans eat plenty of grains (in the form of bleached flour), most of us consume less than 1 serving of whole grains per day. Women should have 5 ounces of whole grains–oats, quinoa, brown rice, barley, whole wheat etc.—and men should consume 6 ounces per day.

Avoid Portion Pitfalls—Measure your portions. Purchase a food scale to help keep you honest with your serving size. When you snack, don’t reach into a jar or bag for repeat handfuls, Instead, measure a single serving snack to enjoy. When you eat a full meal, consider using a 9-inch plate, which will help you resist the temptation to fill a larger plate.

Be a Smart Shopper—Plan a weekly menu and use it as a shopping guide. When you’re at the store, avoid the candy and sugary drinks aisles. Instead, start in the produce section. Also, don’t shop when you’re hungry.

Dine Out with Care—Restaurant portions can be huge! Be mindful of your regular portion size, and ask for a to-go container or share your meal. Another good tip is to eat your veggies first, to help fill you up. You can also ask for food to be prepared in a healthy manner and request sauces and dressings on the side.

Limit Added Sugar—Most of us eat far more sugar than our bodies need. The recommended daily allowance of sugar is 6 teaspoons for women and 9 teaspoons for men. The new food labels coming out in July will show added sugar, which will be helpful for those paying attention to their intake.

The Evergreen Park Chamber of Commerce welcomed new directors to its leadership and honored a longtime volunteer at its annual Holiday Luncheon on December 12.

Longtime resident and volunteer Virginia Wrobel was named Evergreen Park’s 2018 Citizen of the Year for her dedicated years of service in the community and especially for her work with senior citizens.

Wrobel was the first director of the Evergreen Park Office of Citizen Services, a position she held for 15 years. She also is the founder of several service organizations in Evergreen Park, including our Food Pantry and a local chapter of Meals on Wheels.

Accepting the award, Wrobel thanked the hundreds of volunteers and village employees who have worked with her over the years. Every department willingly contributes to programs that Wrobel has been involved with over the years, “and with smiles on their faces,” she said.

“We are blessed in this village to have such a means of cooperating and working with each other,” Wrobel said. “And for me, it’s just a work of love.”

The 2018 Directors of the Chamber are: 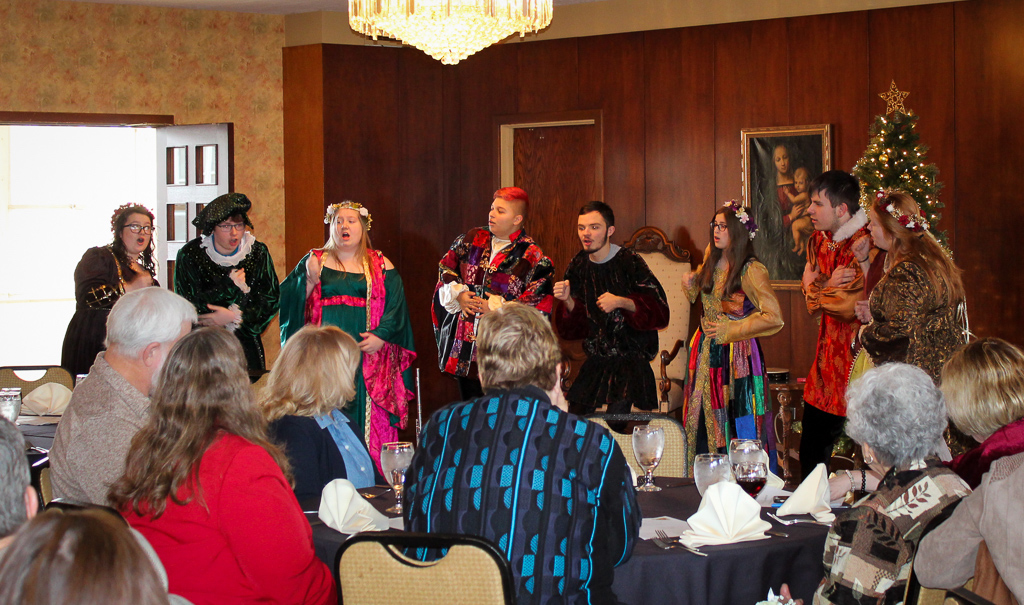 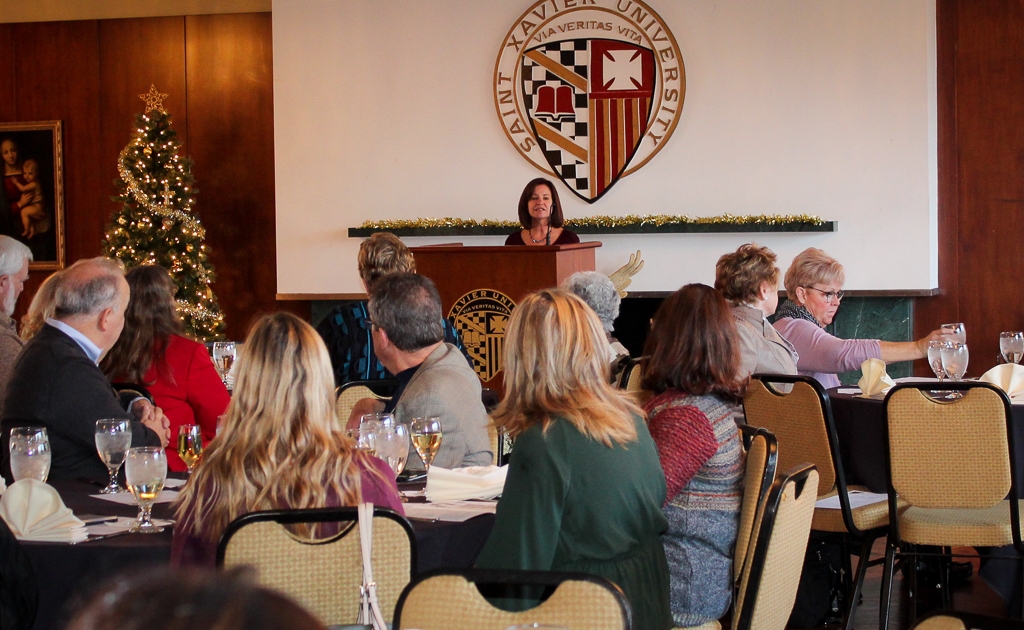 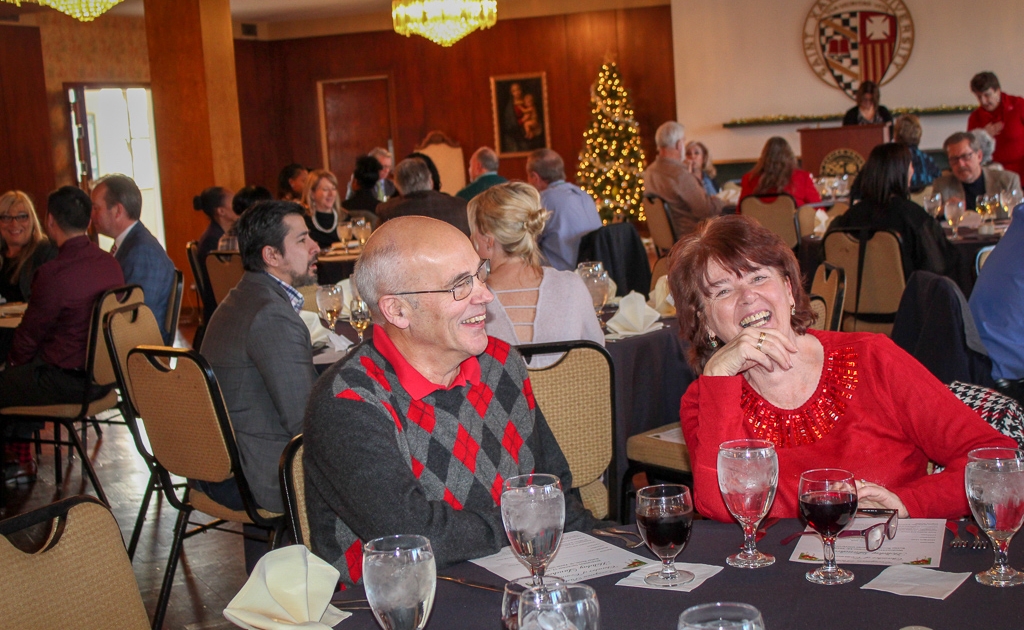 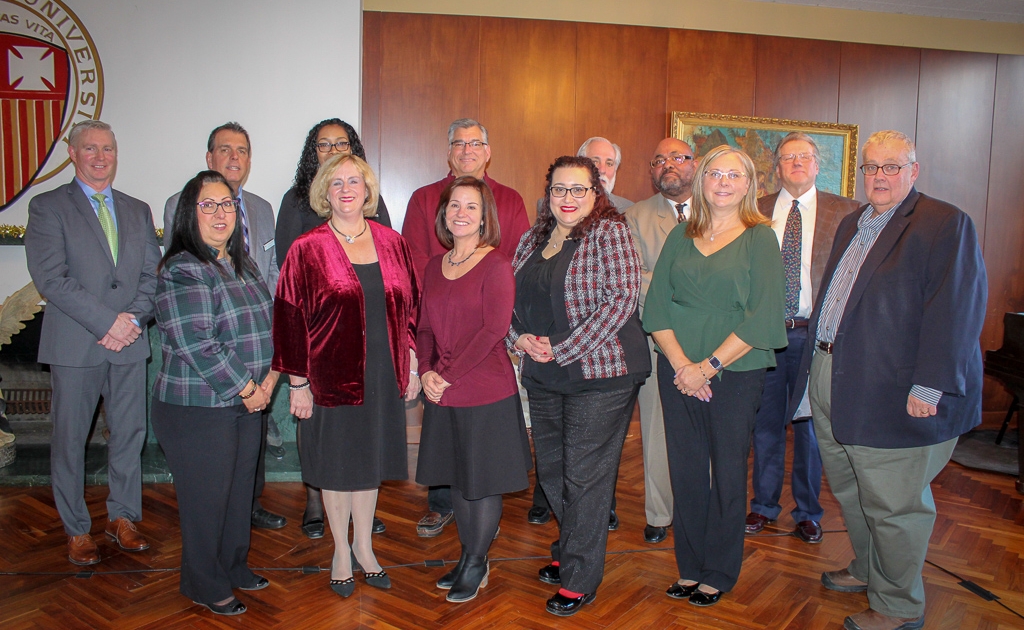 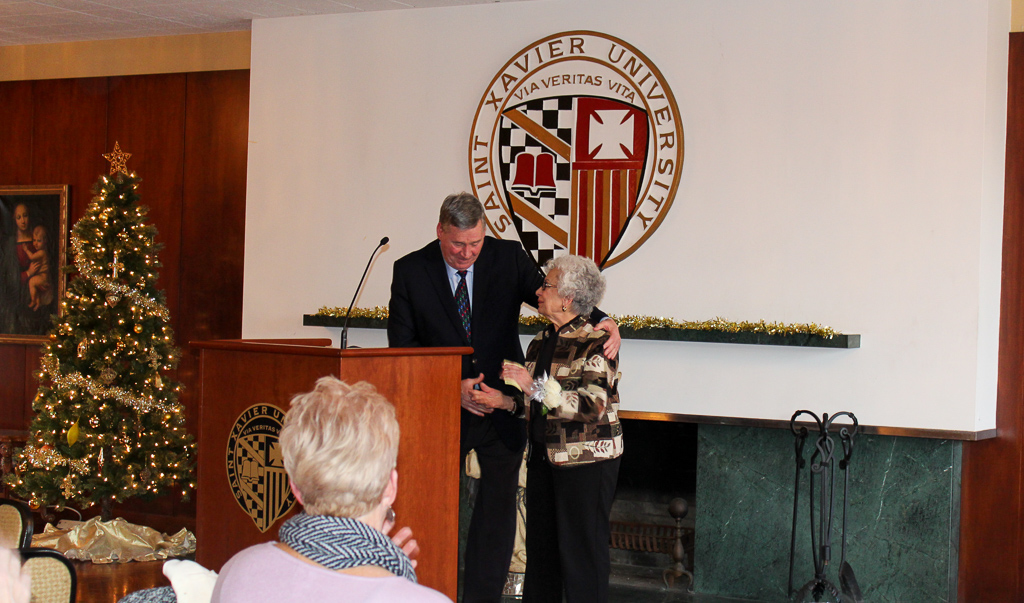 Thanks to all of the families and community members who came out on December 1 to celebrate the beginning of the holiday shopping season in Evergreen Park. The Central Middle School choir gave a beautiful Christmas concert, and children took pictures of Santa. Thanks to our host, First National Bank of Evergreen Park! 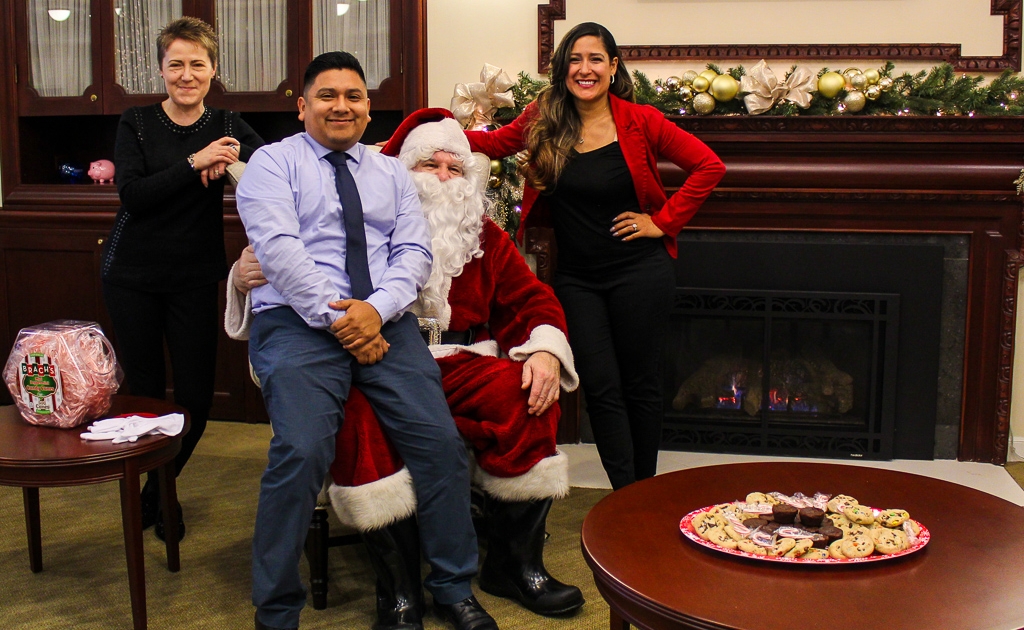 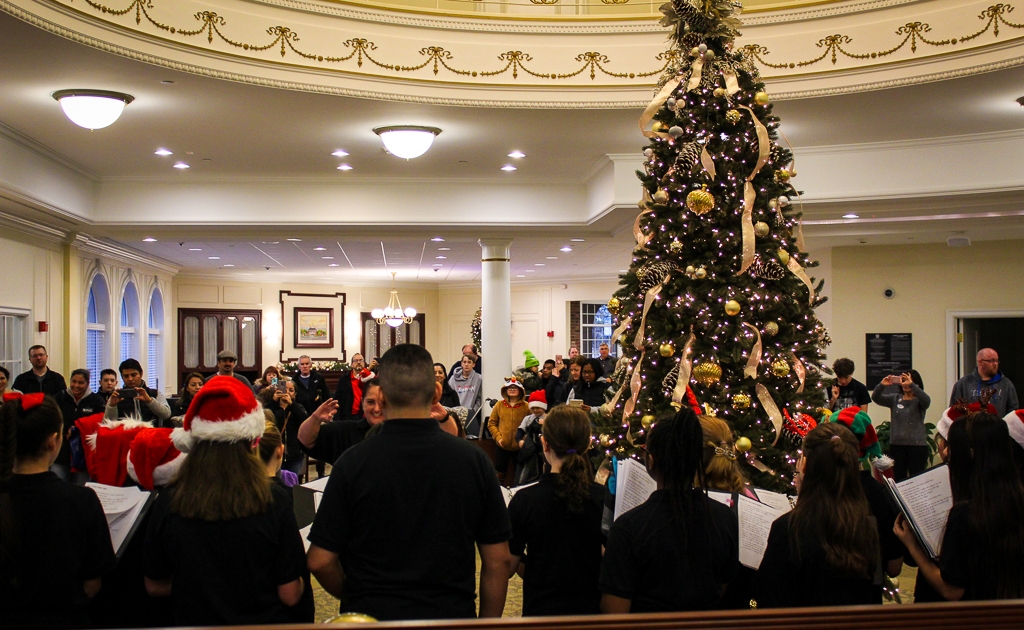 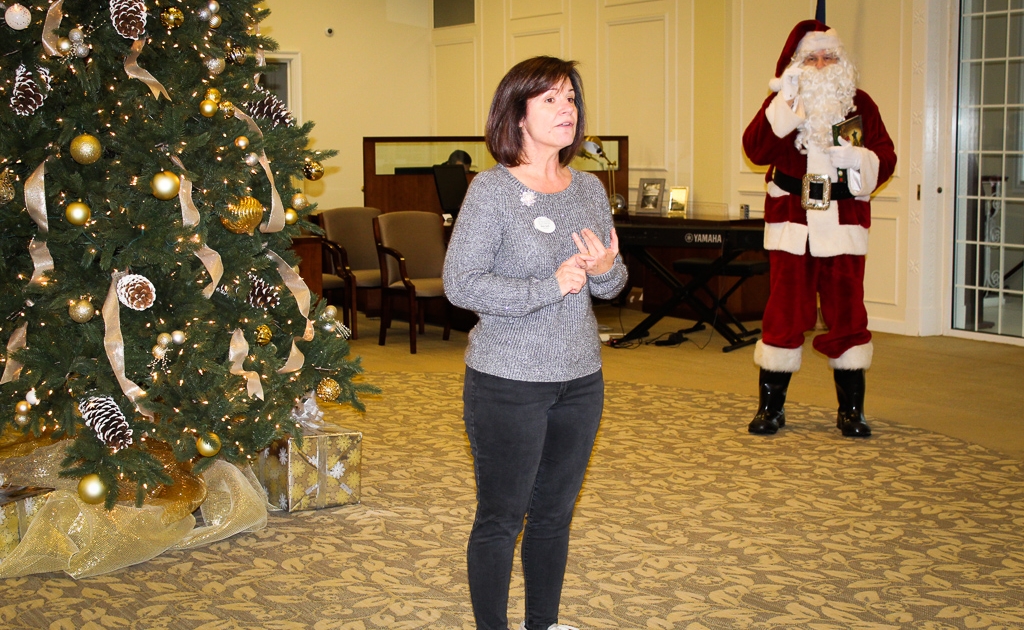 Evergreen Park Chamber of Commerce President Nicki Seidl welcomes community members and reminds them to support local businesses by choosing to shop within the community. 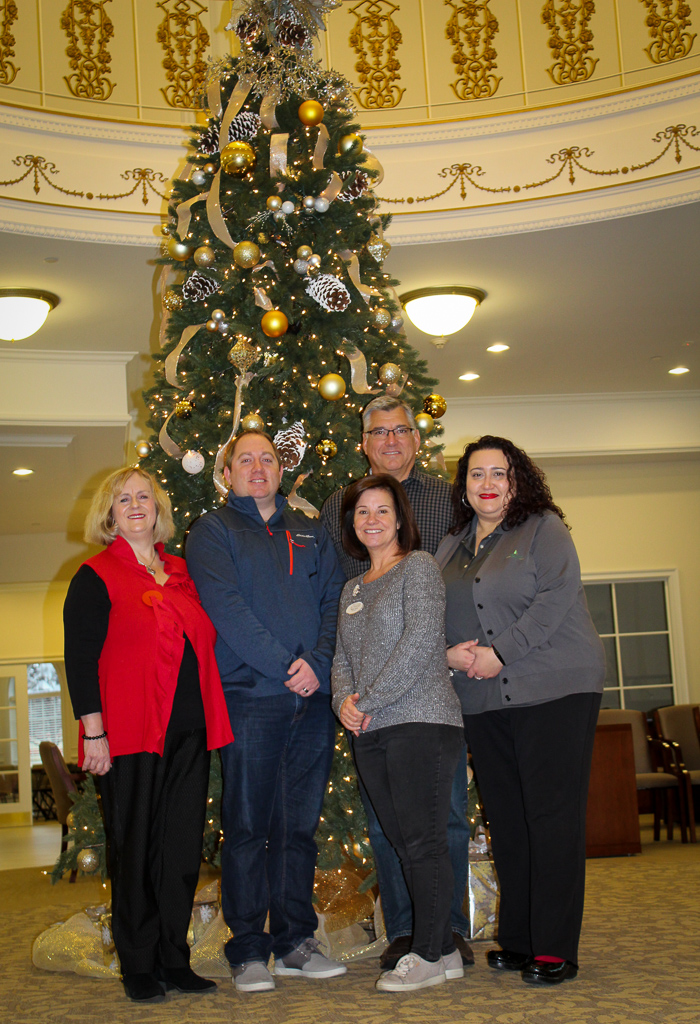 Dr. Robert Machak, Superintendent of Evergreen Park Elementary School District 124, hosted the Chamber event at Central Middle School. He provided a delicious breakfast prepared by School District 124’s Director of Food Services Deb Michicich. The event included energetic performances by the Central Middle School band and award-winning choir, as well as networking and a presentation by District 124 administration officials on the state of the schools.

The four elementary schools and one middle school in Evergreen Park have seen a surge in enrollment over the past four years. The district’s student body has increased by 7 percent, adding some 127 children, according to Tim Kostecki, Director of Business Services for District 124. As a result, the district is financially strong and foresees continued growth. 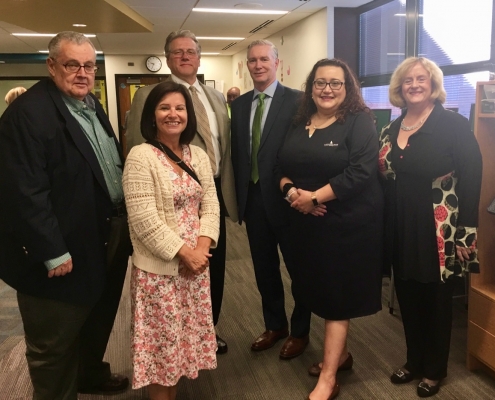 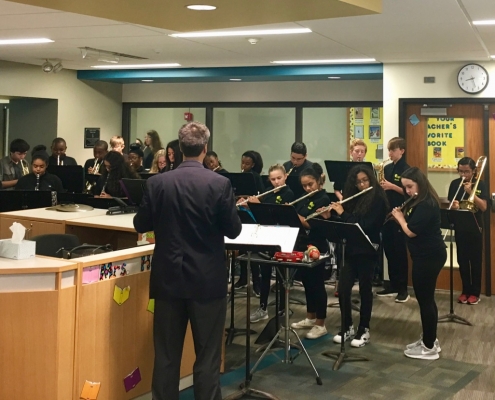 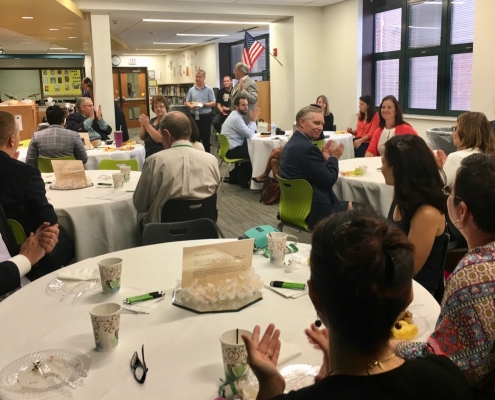 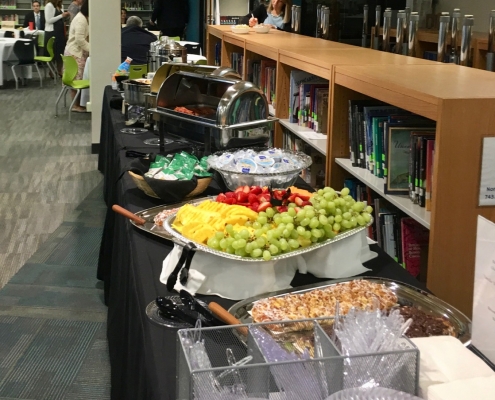 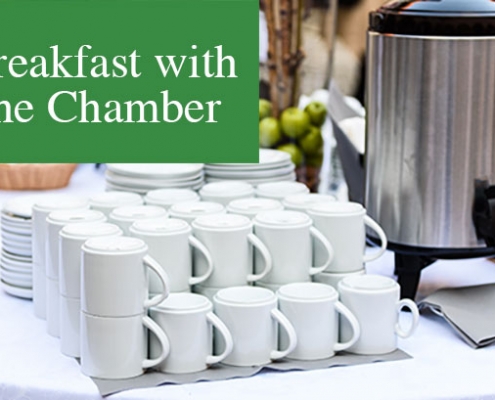 The Evergreen Park Chamber of Commerce hosted a networking breakfast at Evergreen Park Community High School on May 17 that was open to all current, new, and prospective members. All enjoyed a delicious buffet while Thomas O’Malley, Superintendent of District 231, highlighted exciting upgrades to the curriculum and facility. Afterward everyone toured the school, which included a visit to the new, state-of-the-art workout and weight room.

Your next opportunity to connect with fellow members of the business community is at our Lunch and Learn event on Friday, June 22 at noon at the Evergreen Park Public Library, 9400 S Troy. Digital marketing professionals Jim and Laurie Cleary of the Argus Internet Company will share their expertise on how to present your business online. A catered lunch will be provided. Register here.

The Evergreen Park Chamber of Commerce closed out 2017 with a festive holiday party at Beverly Country Club on Dec. 13. Chamber members introduced a new group of officers and directors and presented Evergreen Park Mayor James Sexton with their Citizen of the Year award.

Guests also enjoyed a luncheon, a performance by the Evergreen Park High School Madrigals Choir, and a presentation of the school’s Snow Queen and Court.

New Chamber President Nicki Seidl spoke directly to members, encouraging them to do more in 2018 to strengthen the town’s economic base.

“Keep the Green in Evergreen is a mandate,” Seidl said. “We are responsible for sustaining economic prosperity in Evergreen Park. The foundation of that prosperity is a healthy, vibrant, diverse, and engaged community. It’s that important and it takes more than 13 members on a board of directors to accomplish.”

She challenged members to volunteer their time to help sustain economic prosperity in Evergreen Park through the Chamber of Commerce. “When someone asks, ‘What does the Chamber do for me?’ Say, ’Not as much as it can do with your active participation.’ And then invite them to get involved,” she said.

Interested in joining the Chamber? Explore the benefits of membership today!